Disclaimer: Most of this content was written between 1996 and 1999, when the web was young, and so was I. 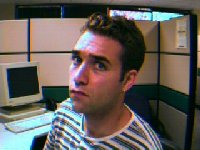 OK, here’s the scoop: I mostly grew up in Cupertino, California, and went to Monta Vista High School. I worked for two years in San Francisco at the Exploratorium, perhaps the best science museum in the whole world. Then I moved to Claremont in Southern California and went to Harvey Mudd College. It’s mostly an engineering school, but I studied Biology because I wanted to be a computer scientist. I ran track there for four years (400m) with the CMS Stags, and just barely broke sub-50. After school, I moved to San Diego and worked at SAIC for a couple of years, building and programming biotech instruments. In November 1995, I started working at Netscape. I quit there in February 1998, after an extended leave of absence. This is why. After Netscape, I spent over two years traveling way too much, all over the world. I’ve also been trying to put together a book of my mother’s artwork, but I haven’t made much progress lately. Until recently, I had been living for a good chunk of years in Copenhagen, Denmark. It’s usually really cold there. (No, Scandinavia is not a country. No, Swiss girls don’t come from Sweden. No, they don’t speak Dutch in Denmark.) I moved to the chilly land of Hamlet at the end of 1999, and worked as a software programmer (again) at a very cool software company called Kapow (I affectionately refer to it as Shazam), back in the saddle with the whole Java gig. In the spring of 2004 I moved to New York City, and started working as the CTO of a great startup, called MediaMall Technologies. Our flagship product is called PlayOn — it streams Internet videos easily to TV’s and mobile devices. In 2006 I moved back to Denmark (I missed the rain and the dark, depressing winters). I want to be an actor. Or eventually go back to school to study more biology. That’s why I’m a programmer.

What I used to do at Netscape…

When I started at Netscape, I was doing secret things. Well, not really. I was working on security, as in secure internet transactions. SSL, cryptography, keys, certificates — that kind of stuff. In July of 1996, I started working on the Internet Foundation Classes, a really cool library for java developers. Early in 1997, we teamed up with Javasoft and started working directly with the AWT guys, to create the Java Foundation Classes. That means I wrote (a very small part) of Swing. If it sucks, it’s not my fault.

When I’m not at work…

I went on an incredible trip throughout South America in December 1998 through January 1999. There are plenty of pictures and stories online, so please take a look.

Some of my favorite places are Europe (especially Switzerland & Scandinavia) and Mexico, where my brother Rodrigo Martinez used to live. I like to play sports (notably soccer, running, volleyball, snowboarding). I like to enjoy good wine and good beer. I like to spend time with friends and family. I miss my parents. I like meeting new people. I like all kinds of music (no country, thanks). I like foxes, as in vulpes vulpes and alopex lagopus. One of my favorite things to do is pretend I know a lot of languages. Maybe that’s because I’m a big mélange of nationalities:

I speak Spanish pretty well, and a little bit of French and Swiss German. I’ve also managed to become a bit more than decent at Danish, which may be no surprise since I lived for over four years in Denmark from late 1999 to early 2004, and from 2006 onward. Hvor er det alt for spændende.

Here’s a big list of all the countries I’ve been to outside the USA, for anybody who cares. Kind of like a shameless self-glorifying conglomeration of patches sewn onto my virtual backpack.

If you’re interested in traveling and hopping about the globe, here are some potentially useful links:

I used to live in San Diego for almost two years, working at Science Applications International Corporation. I did a lot of programming in NeXtStEp. I also spent time doing UNIX administration, mechanical and electrical engineering, and flying to Switzerland. I went there for the summer of 1995 to install a machine we built.While I was there, I got to attend a really cool wedding in Schaffhausen, Switzerland. My illustrious friend Carl Steiner from San Diego got married to a Swiss Miss named Sibylle. That’s Carl next to me.

Here’s a shot of the infamous “Big Dave” David Albarian, while he was visiting me from San Diego. David was Carl’s best man at the wedding, and he also traveled around with us in Europe in 1995. He wore cheap plastic flip-flops and shorts the whole time. Even on broken-down trains in Romania, and when we went out dancing at nightclubs in Budapest. As you can tell, he’s almost as normal as I am.

Der Grosser David has been living in and around Zurich, Switzerland, until recently returning to the mother ship in San Diego. 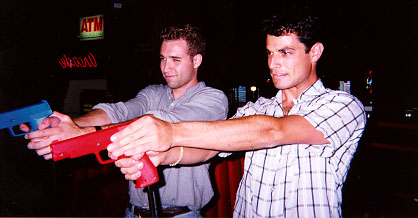 Back in September 1996 after releasing Navigator 3.0, we had a little party at San Jose Live. Open bar too. Nice.

This shot is of Matthew Fisher and me taking care of business. 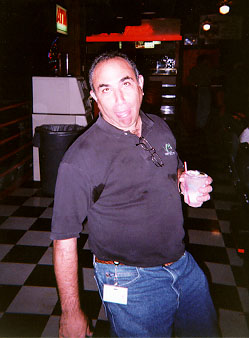 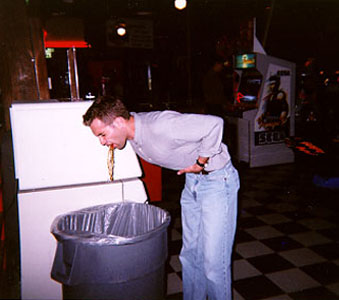 My dad took the open bar thing pretty seriously. Then again, so did I.

Matt won a camera taking this picture of me puking. It was totally my idea. I got duped. He got all the credit for my creativity. At least APS cameras suck, so I didn’t really lose that bad.

If you really think I yacked, you’re stupid. 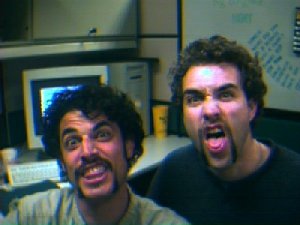 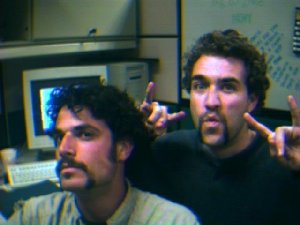 Matt and I decided to have a contest to see who could be more ugly. We started with the goatees, and after a while, shaved into the 70’s Shaft action. Plus the unkempt hair.

Shortly after we started growing our hair, Tom Paquin said to us, “What’s up with this disgusting hair thing? You guys on Team Ugly or what?” 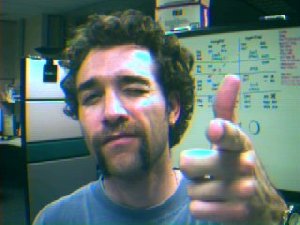 I learned proper winking technique from my old S.F. roommate, Mac Daddy Aleks. The pointing thing is a DKNY original, though. 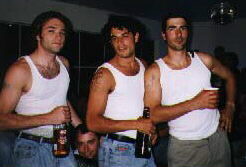 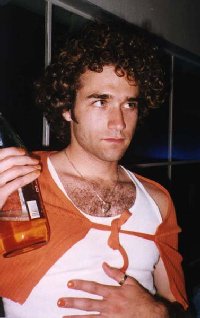 It didn’t take long for us to shave off the nastiness. But the hair had continued to grow and grow. And grow.

It’s hard to see that here, though, because I have on a hairnet in the picture on the left. Don’t even ask. That’s me, Matt, and Lou. Lou was the drummer for our defunct band, The Pie Guys. We sucked really bad. We had one gig at Ireland 32’s in San Francisco in July 1998.

Check out the nice orange fingernail polish. I also took the liberty to borrow a beautiful orange sweater. I thought it complemented very nicely.

Hey, at least the horrible moustache was gone. 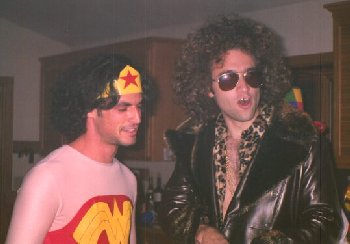 This 1997 Halloween picture is so totally awesome, it’s quite difficult to put words to it. All I gotta say is: 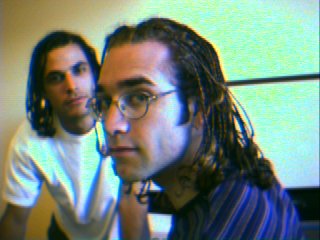 I think I took this black and white shot in one of those instant photo booths at the train station in Bern. 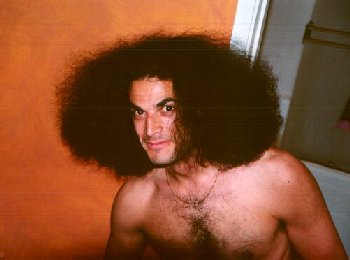 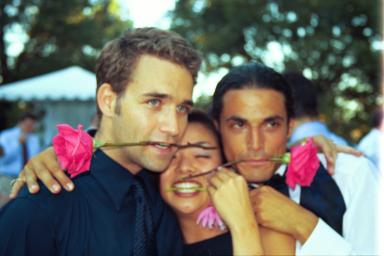 I finally cut the hair in the spring of 1998. Here’s a romantic shot of me, Skye Lee, and Matthew at Chouck and Tracy’s wedding. Nice.

Skye was my super-cool kickass roommate for a year, and then lived in my house in Cupertino for another year after that, after I moved to Copenhagen. Squid moved into my house after Skye left. Now both Skye and Squid live together in San Jose. They’re hitched. See, that’s what happens when you live in my house. Love connection, baby. 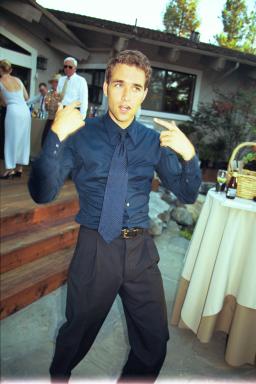 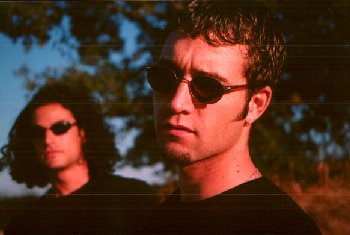 It’s all about the glam shots, baby. Photo courtesy of Valerie Haselton. 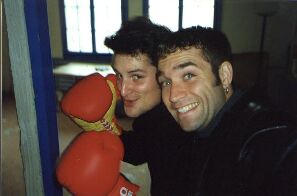 Claude Baechtold is my very, very close friend from Switzerland. He’s a talented designer working and living in Switzerland, and I’ve visited him and his brother François, countless times. Our mothers lived together in an apartment in Baltimore years ago.

This was my wonderful cat Sophie. She ended her days at the house in Cupertino, while I was living abroad in Denmark. I miss her, even though she tended to pee on the furniture. Hey, at least it made the place smell really good. No, really, she was a big fat 10 on the Scale of Cute. Meow, kitty, meow. 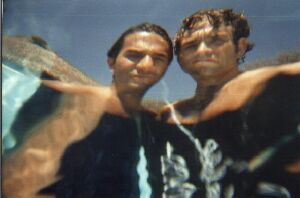 Rodrigo (a.k.a. Daddy Rock) and me in a pool in Puerto Escondido, Mexico. 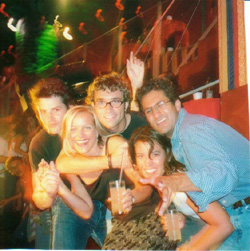 We met Grace and Jen in Cancún in 1999, and haven’t been able to see enough of each other since. The Four Muskateers? Maybe the Four Geeks. Who’d marry us? (Mr. T.) You can see us in action in all kinds of spots, like Mexico, Chicago, and in Denmark. And we’d never be caught on a trip without watching films, doing some serious partying, and when appropriate, ringing in the new year.

Rodrigo and I took a magnificent trip to Iceland in 2002, too. And I was a proud yet shaggy-haired groomsman in Thuc and Angela’s wedding in Hawaii, early in 2003.

Late in 2001 I participated in my first real theater production. Finally. Fame and glamour on the big stage. Or something. It was actually loads of fun, and I’m determined to do more. I played Lysander in Projektmagerne’s production of A Midsummer Night’s Dream. Look, I’m in here somewhere, looking all artsy and everything. Dude, Shakespeare. I also got to play 10 different characters in April of 2003 in A. R. Gurney’s The Dining Room, also produced by Projektmagerne.I’ve even been in a little movie. Nice. And just to be fair, I’ll have you know everything was shot in one take.

While in New York, I lived in the West Village, pretty close to where I took my weekly acting classes in the summer of 2004, at HB Studio. Didn’t have much time for acting, what with the work thing. But, I’ll get there eventually. I don’t even have headshots yet. 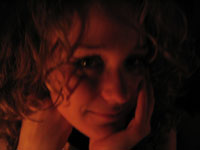 This is Stine. She studied Danish — like rhetoric, linguistics, grammar, literature, communication… kind of like an English major in the U.S. Only, it’s Danish. Get it? She works as a writing teacher at Institut for Uddanelse og Pædagogik.

Her last name is Heger. In the Danish phonetic systems (Dania), her first and last names are pronounced

. You figure it out. Basically, close enough in English would be something like Stina Hey’er. Close enough.

Most people who just see her name written end up thinking she’s a man named “Stein Hegger”. Thankfully, she’s neither a man, nor a large mug of beer, nor a German gin flavored with juniper berries — for all of which, I am truly grateful. 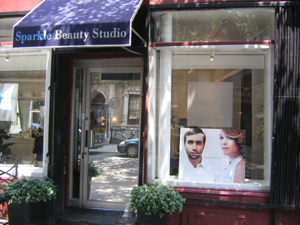 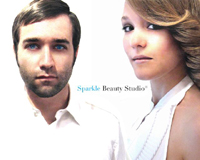 While living in New York, we were asked by the owners of our favorite hair and beauty salon to pose for some marketing material for their boutique. We enthusiastically agreed, and next we knew, we were styled and photographed, and now hang in their shop window. We even appear online in an advertisement on Us Weekly‘s survey site. Stylin’.

Starting in 2007, I created my very own blog. Thus ends over 10 years of editing and posting to this static HTML page. For someone who worked at the forefront of Internet technology, I’m definitely behind in the times. “But I still love technology…” Gosh! Idiot!

According to digits.net, there have been