We’re in the middle of the two-week climate discussions here in Copenhagen. I am hopeful of a progressive outcome, but also skeptical that anything truly effective or groundbreaking will be agreed upon.

The latest I’ve been reading is that in the US, the majority of people actually don’t think climate change is occurring at all. Huh? Excuse me? What the heck is wrong with y’all? (If I bang my fists loudly on my desk, does it help?)

Let’s look at some facts:

1) How much CO2 is the US dumping into the atmosphere? Certainly not that much, right? Think again. (Pay special attention to slide 3, which is per capita): 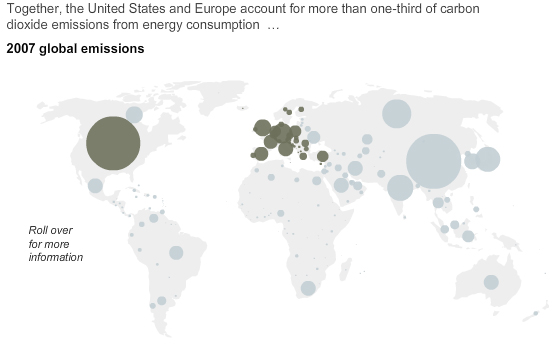 2) “But wait, CO2 is good for the environment, and this whole climate change thing is grossly exaggerated. No way it’s caused by man. Temperatures swing all the time. It’s normal!”

Again, let’s look at some facts. Here’s a great audio-visual article at BBC. It only takes a couple minutes to watch. Note that over the past 800,000 years, the atmospheric levels of CO2 have never even been close to what we see from the past 50 years. See that blue spike at the end of the graph? Does this not concern you at all? Are the short-term gains of unchecked production and consumption really so important that it’s worth jeopardizing life on our planet? (Why isn’t this a total no-brainer? Somebody help me here.) 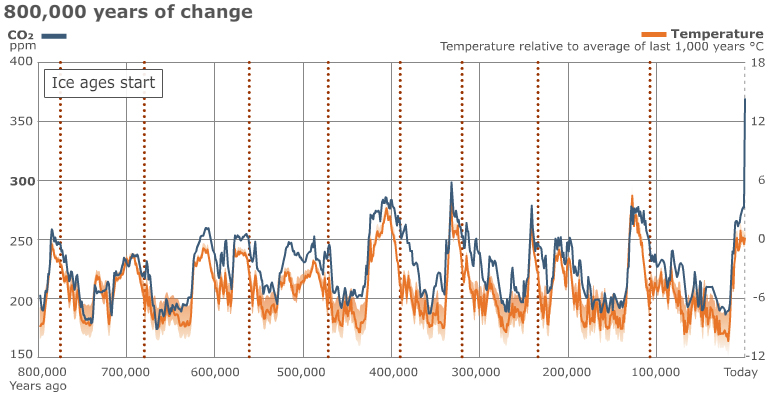 OK, so what riles me up most about our current state of affairs? Without a doubt, it’s that the US (and China) adamantly insist that protecting the climate is a shared global responsibility, and that the blame and burden should be equally shared. I’m sorry, but this strikes me as preposterous to the point of being tragically absurd. Let’s pretend we have two neighbors. A rich American and a poor African.

American: “Woops, I just dumped a bunch of garbage on your vegetable garden by accident. I have been generating this garbage for 50 years, and I ran out of room. Don’t you agree that this was partially your own fault and you should clean up half of it? That is only fair.”

American: “Well, I have more money than you, and I generate way more garbage than you, and in order for you to save your own lawn I think you should agree to help stop generating garbage too, and be punished as much as I.”

African: “You mean you want me to stop generating waste too? I barely have any waste.”

American: “See, you like it! Hence, you owe me. Plus your vegetables were weird exotic things I can’t pronounce. That garbage I dumped was actually a big help for the world, plus it was really your fault to begin with. Please sign here.”

Grumble, grumble. I mean, did you even see the chart above from the New York Times, about how much African nations are polluting, compared to China and the US? Look at the nice round circles. Having trouble finding ones over Africa? (Yes, you’re right — it’s a left-wing conspiracy, and crazy scientists removed the circles on the graphic covering Africa.)

Another big issue is that the US Congress actually has to decide whether whatever comes out of COP15 should be enforced in America. Obama can decide it’s a great idea, but senators and representatives have to ratify the thing. Will they? I doubt it. They’ve got constituents and reelections to worry about. Who cares about the island nation of Tuvalu? I’ve never even heard of it. Pfshaww!

Some of you may have heard about the protests here and the mass arrests. In general, I side with the police on this one. There are two kinds of protesters assembled here in Copenhagen: peaceful, and violent. The former make up the vast majority, and have held a number of small and large demonstrations, trying to call attention to specific issues in specific geographic areas, or just to remind the political leaders that the issue of climate change is a big deal. The latter group, a tiny minority who are here to spoil the whole thing for everyone, are a real pain in the arse. “Let’s fix climate change by burning cars! Yeah!” C’mon people. You want change? Then fight with pen, paper, voices, and votes. Smashing windows and throwing rocks at police (they’re just people too) ain’t gonna help. Plus, I bet you’re here just to break stuff anyway, and you don’t care a rat’s bum about climate issues.

Anyway, the mass arrests have unfortunately affected mainly innocent people, who were just in the wrong place at the wrong time.The police have seen unruly behavior, and young crazies wearing all black and masks, intermingling within the throngs of perfectly peaceful activists, trying to stir foment and trouble. So, the cops have just arrested in droves to prevent things getting out of hand. Yeah, it sucks. But what should they do instead? Let the troublemakers ruin the whole show? I’m open to better suggestions.

(Please see what happened in May 2009 when troublemakers from the radical group “Undoing the City” were left unchecked by police to wreak havoc and destroy property on Hyskenstræde in inner Copenhagen — right where my office is.)

This entry was posted in General. Bookmark the permalink.