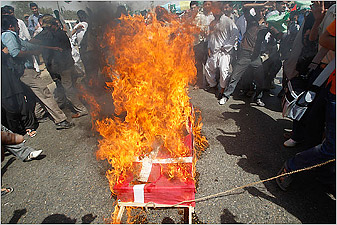 Everyone is pissed, and I don’t see how this is going to end well. I think everyone just needs to spend a weekend together in the mountains and chill and work out our differences. Real universal dialog is the only thing that will help, at this point.

The latest I heard, Osama bin Laden is calling for attacks against Denmark.

On the one hand, I can understand that the drawings have offended millions of Muslims. I admit, I don’t understand it way down in the bowels of my gut, because I can’t imagine feeling so offended by a drawing, ever. But I can respect that people have been offended.

But plotting to kill people because of a drawing? I mean, I’m sorry. Are you kidding me? How about plotting to hold a discussion and debate, to help enlighten people?

I wish those drawings had never been printed. I of course think freedom of speech and religion is paramount to a free and healthy Planet Earth. But the price for it in this round just stinks.

All said, I must say, I agree wholeheartedly with this statement by Flemming Rose, the editor of Jyllands-Posten:

“It was not about mocking a minority but a religious figure, the Prophet, so it was blasphemy, not racism,” Mr. Rose said of the cartoons. “The idea of challenging religious authority led to liberal democracy, whereas the singling out of minorities, as minorities, led to Nazism and the persecution of the bourgeoisie in Russia. So this distinction is crucial to understand.”