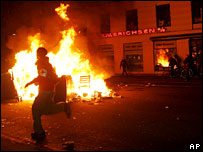 The past few days have been a bit chaotic out on the streets of Copenhagen.

It all started in 1982, when the city essentially allowed the left-wing youth activists at the time to take over a house in Nørrebro so that they could hang out and listen to punk music and pierce each others’ navels and such. This all worked out just fine for a few decades. Then, a few years ago, the city decided that they would sell the house to private interests. Which they did. A Christian fundamentalist interest (how ironic) bought it in 2000, and the youngsters living there were from that point forward officially squatters.

The Christians decided in 2006 the squatters should finally be kicked out. They got a court order to evict, but the kids refused and vowed to fight back (which they did in December 2006 by throwing heavy and/or burning things at people). To the activists’ credit, the city should never have sold the building, especially since it’s an important cultural icon and haven for alternative thinking. It was quite unfair of the politicians to pull the rug from under their feet like this.

Then, a few days ago, the police stormed the building at the break of dawn, and arrested all those inside. Throughout the rest of the next few days, the city exploded with protests, most of them ugly. Cars were burned. Cobblestones (literally ripped out of the streets) were thrown at police. A high school was vandalized for $100,000 in damages. 7000 books were burned. 20 computers were smashed. A nursery school was trashed. Woot! It’s fun to riot and protest. I think over 600 people have been arrested.

I should point out that the original youth house is only about a half mile from my apartment. Most of these protests occurred not too far down the street. In fact, one of the buildings that the youth occupied during the mayhem of protests is literally a stone’s-throw away from our home. Fortunately, no rocks flew into or out of that particular building.

Anyway, things have quieted down now. But I am pretty ticked off at these idiots who think it’s OK to destroy property, and worse: to throw objects that could kill someone. A lot of them are from other countries, mainly Germany and Sweden. I think they came here not to protest for the rights of the youth group, but rather so that they could reenact their wildest Grand Theft Auto fantasies.

Unfortunately, the activist group doesn’t really have a clear message for what they want. Other than that they want the house back, and that they are willing to get arrested for (violently) protesting. They were actually offered some fairly reasonable alternatives over the years for a new house, all of which they flatly refused. Now very few are on their side anymore. Much of the sympathy they had from the community has dwindled away with every car they set aflame and each brick they chucked. I’ll never understand the point of trashing your own neighborhood to show people that you’re pissed.